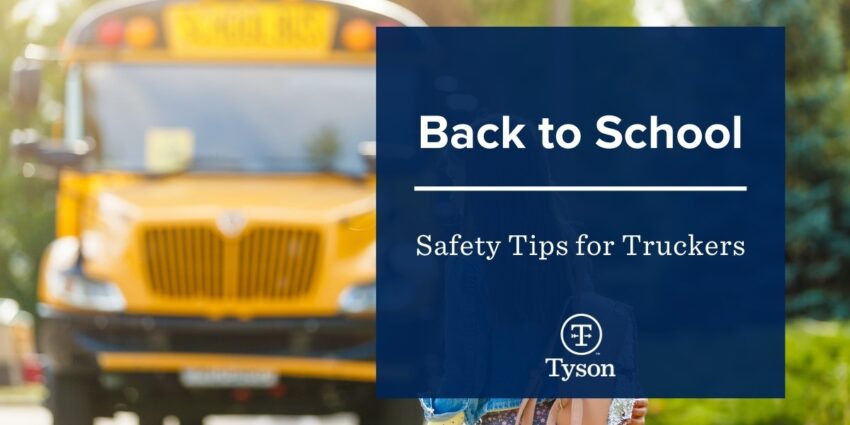 It’s officially back-to-school season! Even if you don’t have a child or grandchild heading back to school during this time, as truck drivers, you’ll most likely encounter increased traffic during school start and end times, school bus routes and kids walking to school as you’re making some of your runs. Since it’s been a long summer, we wanted to give our Tyson family a refresher on school traffic laws and other important safety tips when it comes to school busses and zones:

When a bus has their lights flashing and its stop sign extended, most states follow these laws:

- When driving on a two-lane road, traffic must stop in both directions.

- On a two-lane road with a center turning lane, traffic must stop in both directions.

- Four-lane roads without a median separation requires all lanes of traffic to stop in both directions.

- If there’s a divided highway of four lanes or more with a median separation, only the lanes traveling in the same direction as the school bus must stop.

West Virginia (unless it’s a divided Interstate highway), Arkansas (where the divider is less that 20-feet wide), Mississippi and New York require traffic to stop in both directions regardless of whether there is a median or not.

Yellow/amber flashing lights indicate that the bus is preparing to stop and pickup or drop off students. These lights are usually turned on about 300 feet before the bus stops. Drivers should plan to stop as soon as the bus does and/or the red flashing lights turn on. The red lights indicate that the bus has stopped and, therefore, other motorists should too. While most buses will also have a stop sign arm extended at the same time, motorists are required to stop any time the red flashing lights are on, regardless of the use of the stop sign.

If you’re driving behind a school bus and it makes a stop, you’ll need to stop 10-20 feet (required length varies by state) from the front or rear of the bus. You are not able to start driving again until the bus begins moving. Buses not only make frequent stops for students, but they also stop at railroad crossings and drive at a slower speed than regular traffic. It’s important to maintain your distance and even put 2-3 seconds of space in between you and the bus as you’re driving.

Pedestrians generally have the right of way when crossing at marked crosswalks, as long as they’re following traffic signals and “walk” signs.” Laws for motorists regarding crosswalks will vary by state, but a general rule of thumb is to come to a complete stop for anyone in a crosswalk, regardless of which half of the road they’re on. You also shouldn’t try to pass another vehicle that has stopped for a pedestrian in a crosswalk.

It’s important to keep in mind that just because pedestrians should look both ways before they cross the street, it doesn’t mean that they actually do. Be aware and alert at all times so that you can stop quickly if a child runs out into the street.

School zones encompass the area surrounding a school that has a high volume of school-related traffic throughout the day. This often includes one or two blocks around the school. You’ll notice school zones because they’re marked with school crossing signs, special speed limit signs, school zone markings on the street and other traffic devices. A typical school zone speed limit in most U.S. states is between 15-25 mph. Drivers going through school zones should always be on the lookout for children and pedestrians, reduce their speed and follow the direction of any crossing guards.

Tyson’s main goal is always to ensure that everyone stays safe on the road. If you have a loved one heading back to school this fall, we hope they have a great year!

At Tyson Foods, we’re passionate about safety. If safety is a priority for you too, reach out to us to learn more about joining our team!